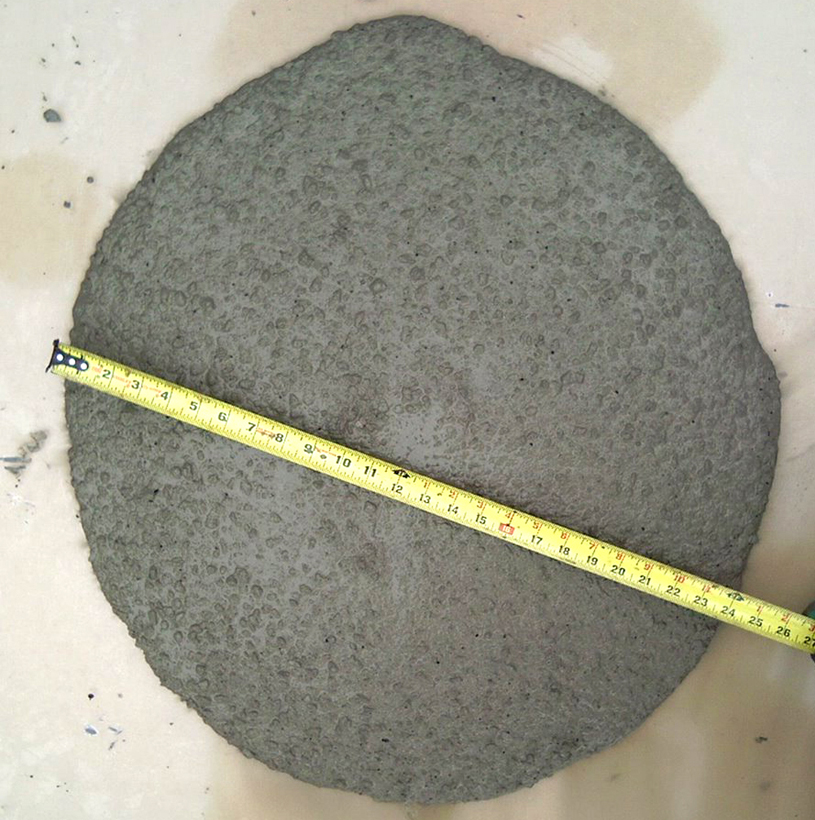 With the growing popularity of specialist concretes such as self-compacting concrete (SCC), the need for information about the raw materials has increased considerably for manufacturers. The processes used to produce these concretes have also had to be considered to ensure they allow the correct proportioning, mixing and placing at the plant or on-site. It is now clear to most concrete producers that the need for adequate quality control is much more critical with SCC than in the case of conventional concretes. In addition, the production of SCC’s requires greater competence from those involved as well as good control of material and equipment used for production.

1. The Importance of Water

The control of the water content in the production of any concrete is essential but as will be discussed in this article, it is even more crucial in SCC production. Its direct effect is measurable in terms of strength, fresh properties and durability. These effects can be broken down into all the main characteristics of concretes including strength, workability or flowability, rheology, stability and durability.

Water content changes can originate from different parts of the concrete production process including:

3. The Effect of Water Variation

Variation of water affects the production of concrete in many ways. For a greater understanding of these effects, it is helpful to consider the influence on the individual constituents and the concrete properties that are affected by it. Moisture will have an effect on:

As can be seen above, the range of free water which different size aggregates can ‘hold’, increases as the grading decreases. This occurs due to the increased aggregate surface area by weight. Due to proportionally high use of fine aggregates in the production of SCCs (usually 48-55% of total aggregate weight), the potential effects of moisture variation increase in relation to ordinary concretes.

3.2 The volume of water dispensed into the mixer

Associated with the effect of changing dry weights of aggregates, the volume of water fed into the mix will change with aggregate moisture variations. Assuming a density of 2400 Kg/m3, a 1% change will result in 24 litres of water change, which will have considerable effects on a SCC’s performance.

Creep is related to the mix’s water /cement ratio and therefore moisture can be indirectly detrimental to durability. Autogenous shrinkage may also occur from varying water contents as it is caused by the internal consumption of water during hydration. Issues associated with an SCCs stability may also affect the finished surface’s permeability having an effect on durability.

Changes in water content affect the flowability of a SCC in various ways. The free water content itself will directly affect the flowability of the concrete, but there are other indirect effects.
One of the indirect effects of water on flowability is the change in aggregate grading. A change in aggregate grading will lead to a change in the flowability characteristics of the concrete. The relationship between fine aggregate and the total weight of aggregate (S/A) has also been found to have a significant effect.
Another indirect effect is also caused by the change in dry aggregate grading variations but relates to the aggregate surface area changes and how these interact with the high-range water reducers used.
The use of viscosity modifying agents has mitigated to some extent the issues occurring from moisture variations. Even so, a major concrete admixture chemicals producer reported typical ‘safety margins’ of 15 litres of water when producing normal concrete and 7-10 litres of water when producing SCC concretes in precast plants.

Maintaining the relevant proportions as defined in the mix design is important to avoid bleeding, segregation and plastic settlement. Precise and accurate water control will help to control the occurrence of all these issues.

As well as improvements in quality, the use of moisture control also allows improved profitability for a concrete production operation. This is defined either in terms of reduction in waste or improvement in the efficiency of the material used.
There are potentially significant savings to be made once a plant has a moisture control system installed and can accurately make consistent concrete, batch after batch.

By avoiding over or under cementing, the concrete producer will reduce cement costs and increase production yield. Although more difficult to quantify than the over-cementing, the reduced number of sub-standard batches resulting from moisture control also increases profitability. The improvement is such that the general consensus from Hydronix customers is that the equipment’s return on investment period is between 3 to 6 months.

The microwave technique has emerged as the most suitable for measurement of moisture in concrete production, mainly due to its accuracy (usually in the range of +/-0.2% to +/-0.4% depending on the quality of the calibration), its lack of influence by dust or colour, and the competitive cost-benefit relationship of this type of equipment.
Hydronix is the world’s market leader in microwave moisture measurement instrumentation. Supplying moisture measurement solutions for both aggregates and fresh concrete during mixing, Hydronix products digitally measure 25 times per second offering market-leading accuracy and speed of response.

Moisture measurement is usually carried out using a Hydro-Probe sensor near the gate of the aggregate bin. Once the sensor has been set up correctly, moisture readings can be taken as an average for each batch, and the plant’s control system can adjust the correct dry weight of each aggregate in real-time.
Typical installation for a digital microwave sensor would be in the neck of the bin where it takes readings as the material flows over its faceplate. Alternative installation positions include the wall of a bin or underneath the gate. For conveyor belts applications, the sensor may be placed above the belt but with the sensing head in the flow and also on a feeder belt under the bin. Installation options can be seen in the diagram below.

Measuring the moisture of fresh concrete in a mixer allows the concrete producer to have full control over the final moisture content before the mix is discharged. This ensures that variations due to aggregate wetting/drying during transport from the hopper to the mixer, or variable water pressure, are dealt with in real-time.
The digital microwave technique is used by Hydronix for their mixer sensors. The measurements from the Hydro-Mix sensor for mixer floors or from the in-mix Hydro-Probe Orbiter sensor are used to calculate the correct volume of water addition required to achieve a consistent final target moisture percentage batch after batch.
Hydronix sensors now offer 3 measurement modes, making them unique in the market. The choice of measurement mode is especially important in the production of SCC where fresh concrete densities vary greatly with the addition of the superplasticisers in the mixer. The measurement modes offered by Hydronix sensors are ground-breaking improvements that offer new options in measuring moisture accurately in the production of these concretes.

Hydronix sensors may also be used to determine the degree of homogeneity achieved by the concrete mixer at any stage of the mixing cycle. Moisture control is in effect used as an indicator of even material dispersion. As the aggregates are blended together with cement, water and admixtures an accurate measurement of the changing moisture content provides information relating to the degree of homogeneity of the batch. A flat trace output from the mixer sensor indicates that homogeneity has been reached.

Using the Hydro-Mix or Hydro-Probe Orbiter sensors allows the producer to determine the exact point at which homogeneity is achieved for a given recipe. This allows the user to identify the optimum point at which to discharge the mixer. A product requiring a smooth surface finish and consistent colour may be mixed until this is achieved whereas a less costly block with less exacting quality demands may be discharged sooner but will still be manufactured with precision and consistency.

The requirement for adequate quality control is more critical with SCC than in the case of conventional concrete. A simple and cost-effective improvement to reduce fluctuations in the fresh and hardened concrete is to install accurate, digital moisture measurement equipment in the aggregate bins and inside mixers in the manufacturing process.
In order to manufacture SCC it is important to continuously monitor and correct the moisture content in the materials including both the sand and coarse aggregates. As well as measuring and correcting the dry batch weights of materials it is also critical to control the water addition into the mixer and to accurately define the point of homogeneity before discharging the mix.
It is important to continuously monitor the moisture content, aggregate gradation and variations in fines content of the aggregate in order to produce SCC with constant characteristics. National institutions and customer experience suggest that the moisture in sands should be controlled for every batch and that the moisture in coarse aggregates must also be taken into account.
As well as moisture being important to SCC production, it is also straightforward to use the same equipment to control mix homogeneity before it is discharged from the mixer.
The use of Hydronix digital microwave moisture sensors allows high degrees of accuracy, repeatable results and simple integration to the control system.
Finally, not only is there a high degree of improvement in quality derived from the use of moisture measurement in SCC production but the increase in profitability is such that the equipment’s return on investment is made in a matter of months.